A Printmaking Collective Finds a Home in the Heart of Greeley 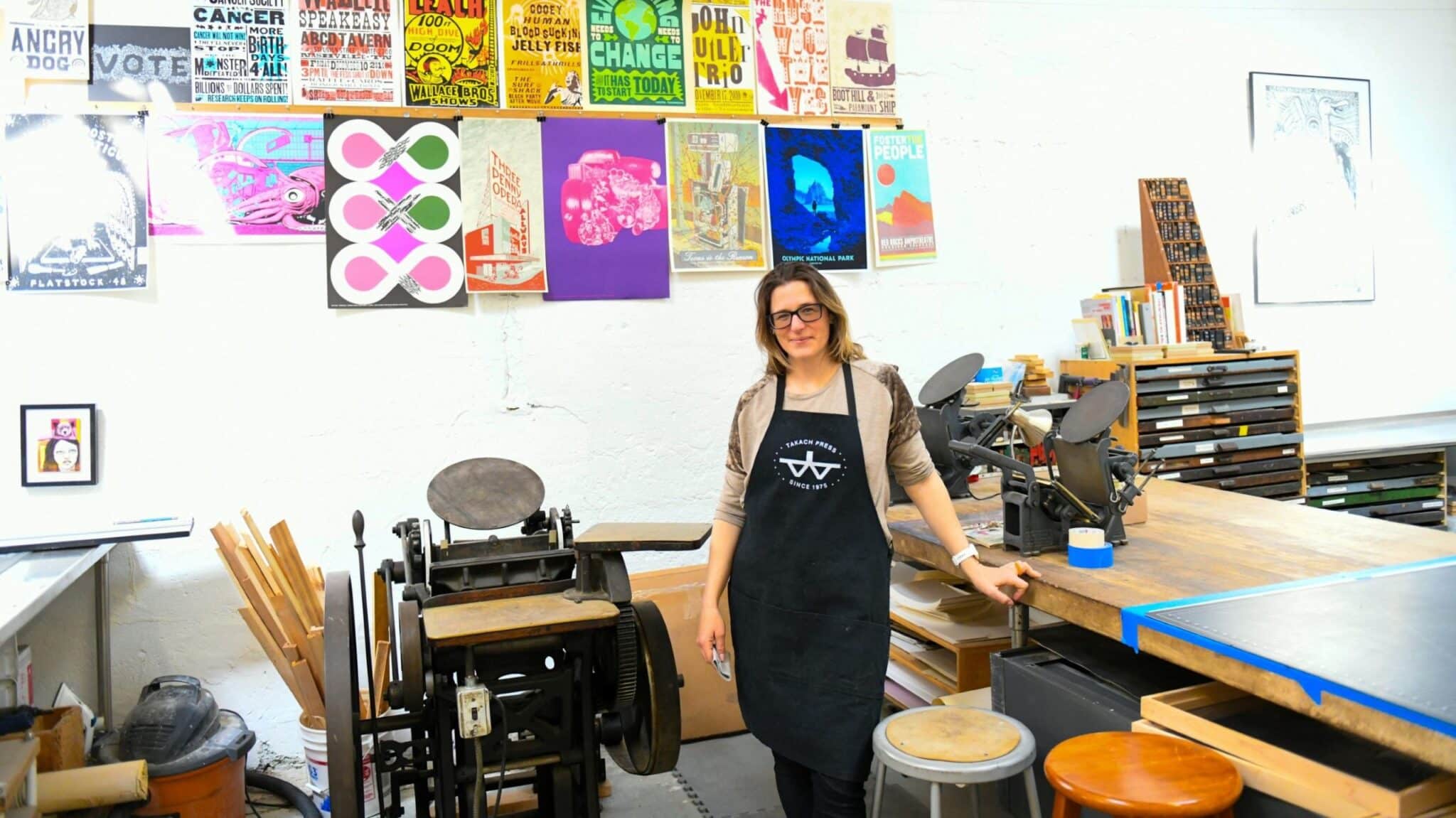 In a city known for its agricultural roots, you’ll find more than a few local artists, galleries, and fine art storefronts in Greeley, Colorado. Vibrant murals stretch across downtown buildings and sculptures span parks and line city streets, many of them showcasing both the variety and quality of talent residing in Weld County.

What isn’t visible are the stories behind each sculpture, piece of pottery, and art studio. Stories about working part-time jobs to fund a full-time passion, journeys across the country for art shows, and working tirelessly to develop fine art into a sustainable business. All these stories collide in one place⁠—a city at the intersection of the high plains and front range.

Wonderhand Studios is a single thread in a tapestry of creative stories in Greeley. The only printmaking cooperative studio open to the public in the Northern Colorado region, Wonderhand resides in the “Courage” building at 721 B, 7th Street in Greeley, Colorado.

It seems almost beyond coincidence that Johanna Mueller and Stan Scott, co-owners of the printmaking studio, saw this building as a potential home for Wonderhand, scheduled a visit, and arrived to find the advertised blank, white, west-facing wall of the former fire station building transformed into a colorful canvas⁠—a child looking through binoculars next to bold, block letters and a bright red heart spelling out “courage.”

The Genesis of a Dream

Mueller, born and raised in Denver, began her career in printmaking and fine art at locations like Anderson Ranch Arts Center in Aspen and the historic Hatch Show Print in Nashville, Tennessee. She later moved to Austin, Texas, co-owning a gallery⁠—the fulfillment of a dream for many working artists.

But dreams aren’t excluded from paying rent, and Mueller felt the strain of both her gallery “bleeding money” and her long-distance marriage with Scott, still in Colorado.

“It’s so hard to keep the arts alive when your rent keeps going up,” Mueller said.

Once her business partner decided not to renew their portion of the lease, Mueller made the decision to return home to Colorado in 2016.

Finding a Home in the “Heart”

In Fort Collins, Mueller and Scott, both printmakers, combined their impressive collections of presses and type, dreaming of someday finding a home for these tools and opening their doors to fellow artists.

“We’ve had this dream of sharing all the equipment that we had with others,” Mueller said.

The price of commercial real estate in Northern Colorado was daunting, and for two years Mueller and Scott searched for a promising property. In 2017, teaching jobs at Aims and the University of Northern Colorado opened the door for them to move to the city of Greeley. What they found was a unique, creative culture combined with the spirit of a small-town farming community.

“Greeley had this nice grassroots, funky feeling that we weren’t finding in Fort Collins or anywhere else,” Mueller said. “People were very into learning about the arts.”

“There are so many hidden gems in Greeley, and those hidden gems are also people,” she said

In 2018, Mueller and Scott put in an offer on the 721 B, 7th Street building and Wonderhand was born.

Sharing the Wonder of Printmaking

Today, if you step inside 721 B, 7th Street, you’ll immediately notice the natural light pouring in from the ceiling skylights, highlighting the various presses and print pieces filling the space, the focal point of which is a large etching press from the 1920s, the prized possession of Mueller’s collection.

The name “Wonderhand” came from Scott, after he and Mueller brainstormed names that represent creativity. He put together “wonder” with “hand,” and it was immediately adopted as the printmaking studio name, evoking imagery of a hand’s capability to create something wonderful.

“Printmaking has always been the art of the people,” Mueller said. “Our full mission is to be an inclusive creative space for everyone.”

Scott and Mueller subsidize the building by renting out a second-floor apartment and store-front business space, creating a long-term, sustainable business model.

The Art of Courage

“I fought for years to be an artist,” she said. “I always came back to making my own work.”

After focusing on creating during the summer of 2020, she emerged a year later with enough successful sales to confidently pursue her passion.

“It made me feel like I can do this,” Mueller said. “Having [Wonderhand] has been a huge part of that. There’s no real handbook. Everyone needs to figure that out for themselves⁠—how they can make it work.”

Mueller shared that one organization in Greeley that prioritizes these types of conversations among creatives is the Greeley Creative District, whose mission is to highlight Greeley’s distinct creative identity and increase the economic vitality of the city through the arts.

“Greeley is a space where artists can be fulfilled and find their community,” Mueller said. “We found our place in Greeley and are thriving.”