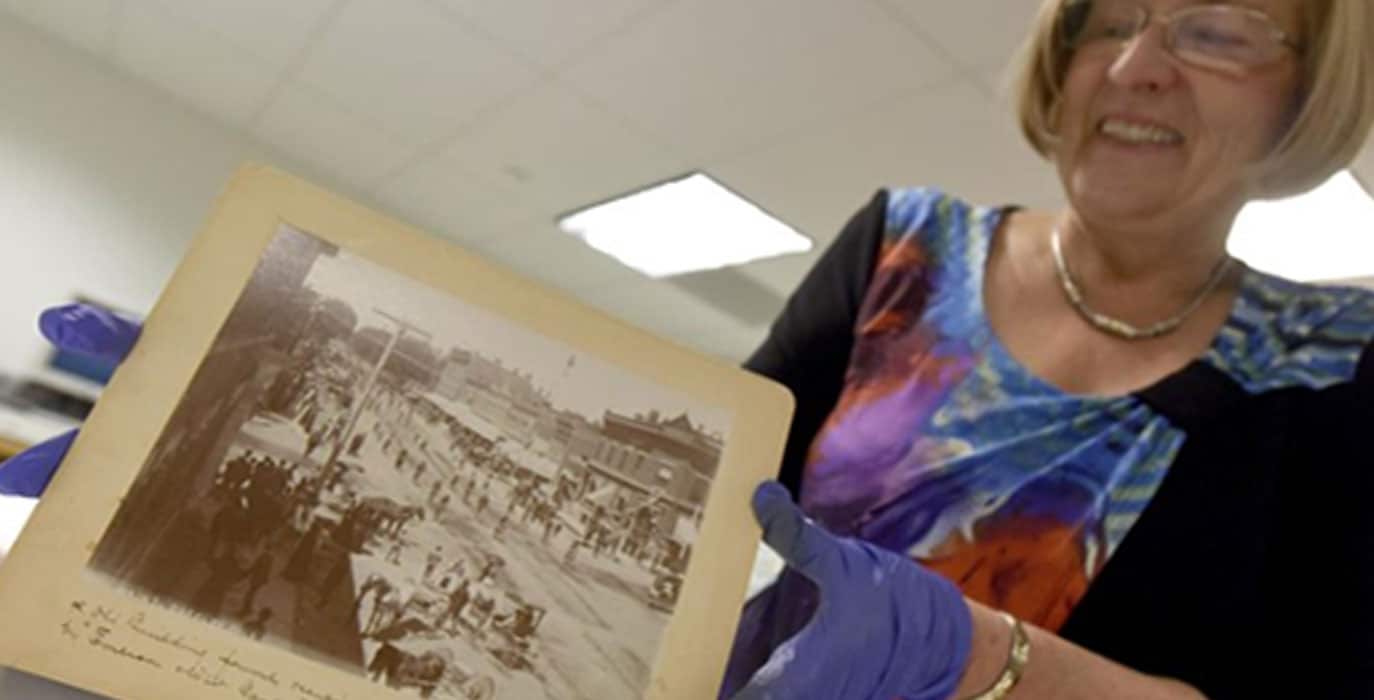 As visitors enter the Greeley History Museum’s main exhibition, “Utopia: Adaption on the Plains,” the gold-lettered inscription at the entrance, “Peggy Ford Waldo Gallery,” welcomes guests inside to explore the history of what is now Weld County. While examining documentation about the Great Buffalo Pasture or how early 1900 advancements led to Greeley’s nickname, “The Athens of the West,” museum guests may not realize another layer of history behind each artifact and description – the countless hours spent by a gifted and respected museum employee to document and preserve the heritage of her home.

Who is Peggy Ford Waldo?

Ford Waldo began her career at the University of Northern Colorado in 1978 as a fine arts library assistant and curator for the Mariani Art Gallery before joining the City of Greeley Museums in 1979. For forty-one and a half years, she developed her skills, working as a research and education coordinator, programming curator, and development curator, gathering invaluable knowledge about the history of Northern Colorado along the way.

Ford Waldo’s abilities and passion for documenting High Plains history spread like a Colorado wildfire. She became the go-to source for genealogists, writers, historians, and students throughout the region and a regular contributor to the “The Greeley Tribune” and “Greeley Style Magazine.” Her gift for writing and encyclopedic knowledge of local history led to invaluable collaborations on well-known works including “The Greeley Philharmonic Orchestra: A Century of Musical Magic;” “Weld County: 4,000 Square Miles of Grandeur, Greatness & Yesterdays;” and “Bears in the Backyard: A Story of Inspiration and Affection.”

Ford Waldo’s legacy goes beyond that of historian, researcher, and author. She was also a beloved colleague, a loyal friend, and an inspirational mentor to many. It doesn’t take long to uncover numerous stories of individuals impacted by her influence and friendship.

Elizabeth Kellums, a City of Greeley employee who worked closely with Peggy on historic preservation efforts, said of Ford Waldo, “She loved Greeley’s history and knew the stories and the facts because she studied, researched, and poured over documents and photos in the archives. In my mind, if there were a position of “Historian Laureate,” she would be it.”

Kellums added, “She cared deeply about people and knew no strangers because she lived beyond and outside of herself and took care of others as she would want to be cared for.”

Aaron Zimola, owner of Zova Marketing in Greeley, considered Peggy both a mentor and friend.

“She worked tirelessly to make a positive impact on our community,” Zimola said. “Peggy threw her entire force behind any project she was involved in, any person that needed encouragement, and any cause that needed energy.”

Read Zimola’s personal account of Ford Waldo’s impact on his life as well as this article that features Peggy Ford Waldo community influence.

Ford Waldo passed away in April 2021 at the age of 72, and in April 2022, museum staff and Ford Waldo’s family rededicated the Greeley History Museum’s main exhibition space as the Peggy Ford Waldo Gallery.

Her name now joins other trailblazers and influencers within the walls of the museum. Names like Nathan Meeker and Hazel E. Johnson, who shaped Greeley into the growing city it is today. They, like Ford Waldo, made a lasting impact on this community because of their passion and dedication to seeing the Greeley community thrive.

Do you know someone who made a difference in the City of Greeley? Share your story and follow My Greeley on Facebook for all things Greeley.