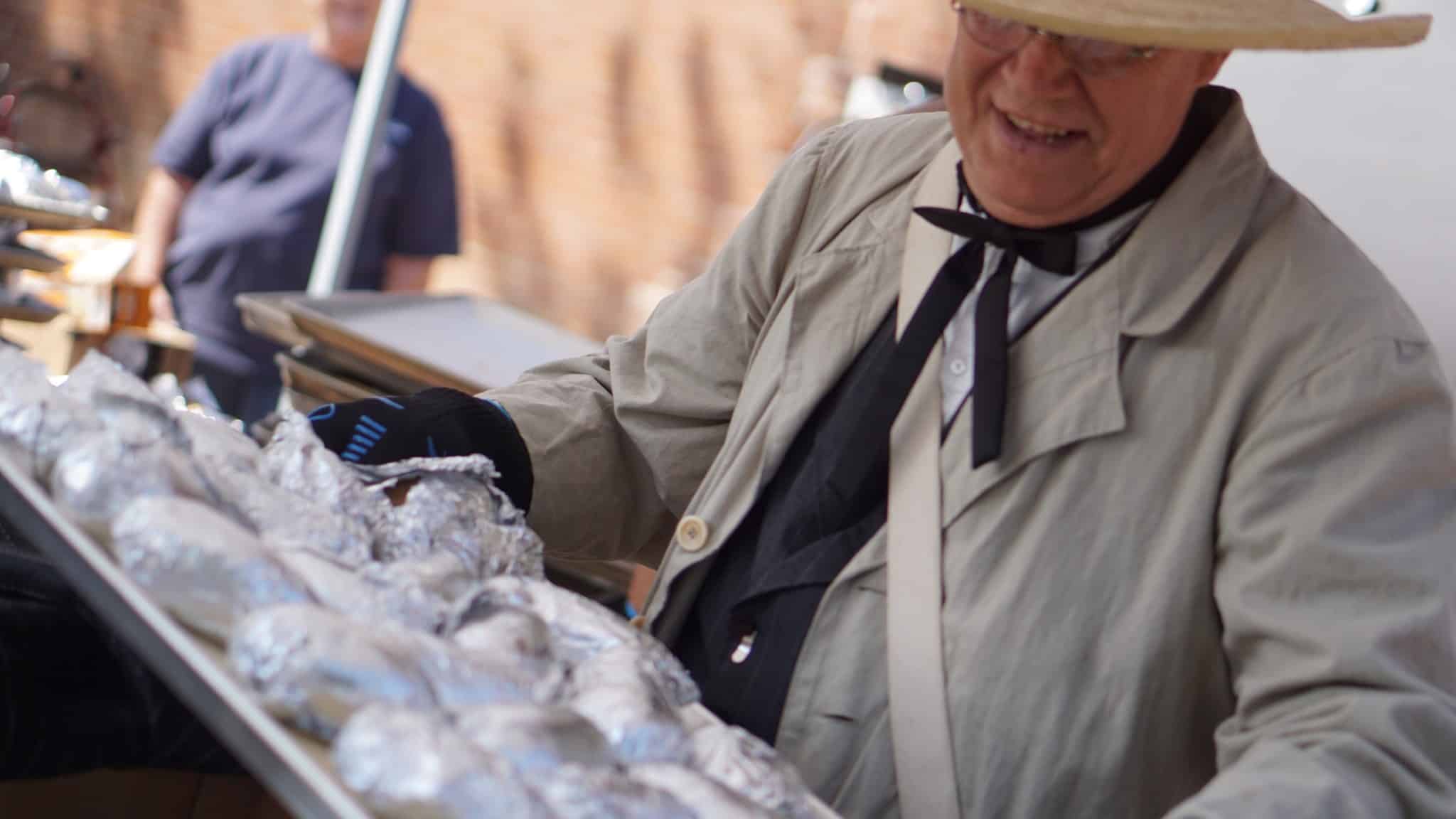 Editor’s Note: A version of this story previously appeared on the former Greeley Unexpected blog.

The success of this event, and Colorado’s local love for baked potatoes, dates as far back as the late 19th century when potatoes earned their place as one of Greeley’s top crops. It became the region’s most important commercially distributed crop… and to celebrate, the first Potato Day was held in Lincoln Park on Oct. 18, 1894.

That year, Greeley citizens paid homage to “king spud” (and a huge array of other crops grown in the Greeley district) by transforming Lincoln Park into an agricultural pavilion. It’s on record that 6,000 people were in attendance for the very first Potato Day event.

(Fun fact: The Greeley Stampede can also attribute its origins to this same potato fandom, launched as a community celebration to honor local potato farmers. Its first name was the Greeley Spud Rodeo.)

In 1986, as Centennial Village celebrated its 10th anniversary, a group of friends—Florenz Hinz, Floris Mikkelson, Shirley Brand, Warren Holm, Joyce Carr, Marie Wilkinson, and other museum volunteers—created a non-profit organization called the Friends of the Greeley Museums. The group’s goal was to recruit volunteers and raise money to support the preservation and educational programs at the City of Greeley Museums. To them, a fall harvest festival at Centennial Village seemed like a great fundraising idea and the “Friends” held their first Potato Day on Sept. 26, 1987.

In fact, Friends of the Greeley Museums has raised and donated nearly $500,000 to the Museums since its founding. The organization still hosts the annual Potato Day event and proceeds continue to be used in support of museum preservation and educational programs.

To this day, Potato Day is Centennial Village’s biggest and best event of the year! A must-attend event for all ages, you’ll enjoy all that Centennial Village has to offer including live entertainment on two stages, a historical reenactment by the Buffalo Soldiers, living history demonstrations, old fashioned carnival games, presentations by the Young Chautauquans, and more. Of course, every ticket purchase comes with a fresh, famous baked potato loaded up with all kinds of delicious toppings from the potato bar.

Join us for Potato Day on Saturday, Sept. 10, 2022, from 10 a.m.-4 p.m. at the Centennial Village Museum. Admission is $7 for all visitors ages three and older and can be purchased in advance online.