The Greeley Music Artists We Just Can’t Get Enough Of 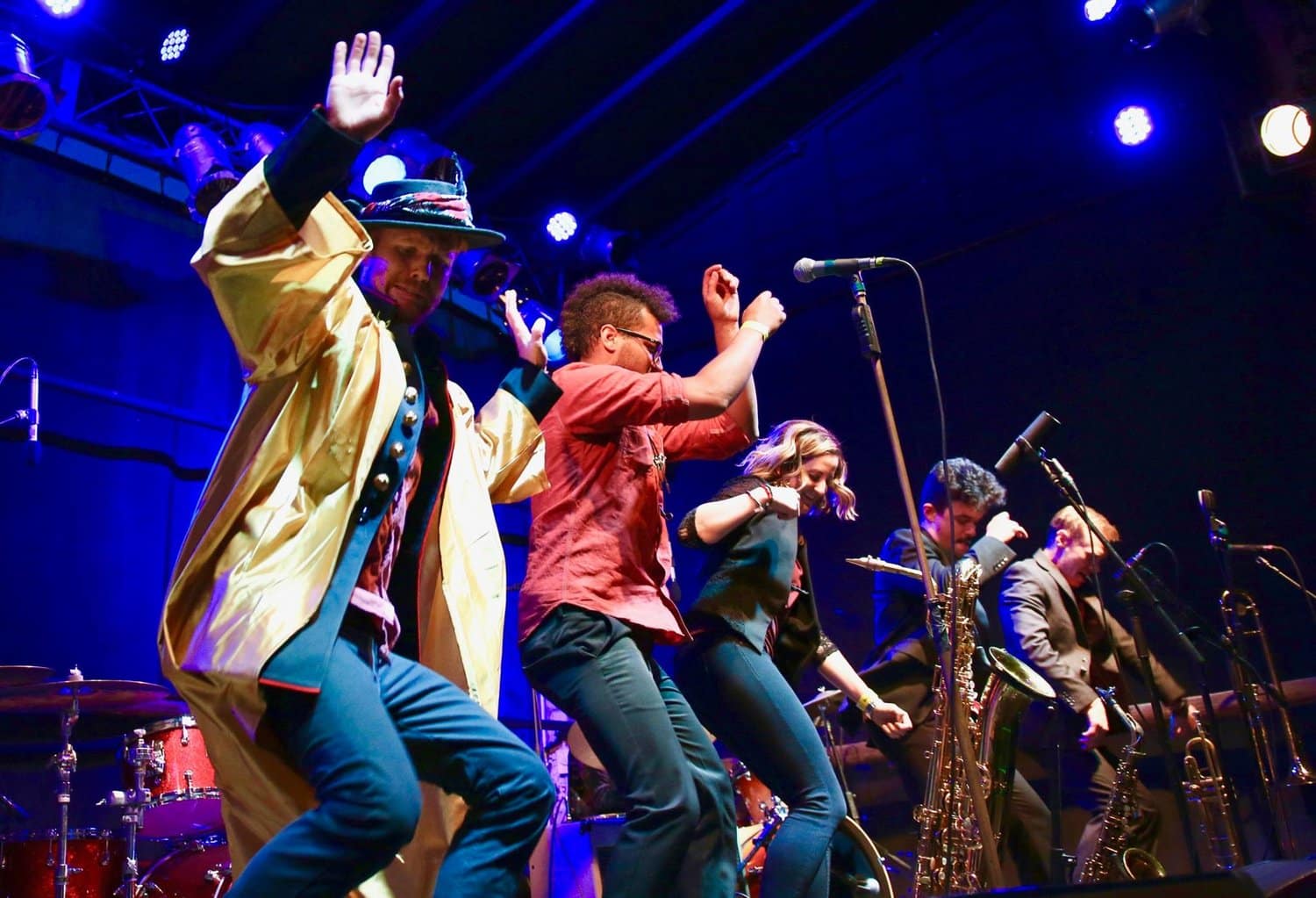 Spotify Wrapped has wrapped, which means you’re probably itching to start off 2023 by adding new music to your playlists. As you prepare to round up new contenders for your top-listened track of the year, look no further than these music artists from Greeley, Colorado. Whether they were born and raised in town, are graduates of the award-winning University of Northern Colorado School of Music, or have moved here to perform in bars and at the Moxi, these musicians have called Greeley home at one time or another. From surf rock, country, and metal, to hip-hop, soft jazz and more, Greeley has much to offer your ears.

Snag your headphones before you read any more! Our image campaign intern (and resident Gen Z voice) Elise Shoemaker curated some of our favorite Greeley artists who are available to stream online or see live. Take it away, Elise!

The band with a vintage funk sound but with modern twists, The Burroughs have been performing since 2013 and dub themselves “sweaty soul music.” Even when touring around the country to play large scale festivals, they have never lost sight of their hometown: Greeley, Colorado. Add them to your playlist if you like dancing in the kitchen, need new running tracks, or low-key love a horn section.

You can stream their music on all platforms and they often play local and regional shows. They have wearable merchandise available and have some recorded live albums that are a great listen. The Burroughs’ next event in Greeley, Colorado, is in March 2023 where they’re performing with the Greeley Philharmonic Orchestra!

The Giants & Pilgrims duo is made up of married couple Tim and Betony Coons. Tim is a musician by trade and Betony is a visual artist (you’ve seen her murals around town, like “World and Whale” on the side of the Atlas Theater), and the combination makes some magical music.

Their music is inspired by nature and love, with a recent release on Bandcamp showcasing their connection to the natural world, this time Midwestern trees. Their albums are paired with Betony’s work, and she is available to live paint while Tim performs.

Their music infuses meaningful lyrics and emotions that speak directly to your heart. The music is a bit majestic, with guitar strings and lovely piano sounds that have a bit of a folk touch. Their music is whimsical and perfect easy listening that feels very reminiscent of that first road trip you took with your friends. Giants & Pilgrims is available on streaming platforms, and they have multiple videos on YouTube.

On top of the music, Betony’s work is featured in her music videos, and prints and originals can be purchased off Esty and on her artist website.

UNC alumni Nathaniel Valdez started INTHEWHALE in Greeley, Colorado, as a solo project in 2012 and over the course of a decade, INTHEWHALE has exploded on the heavy metal market. With the addition of drummer Eric Riley, they moved to Denver, placed on college radio charts and even started playing festivals and released an EP “Nate and Eric.”

Heavy metal, nihilism, and some screamo elements describe INTHEWHALE best. This band fits all the requirements for a great high intensity workout, project session, and much more. While currently residing in Denver, they are always back where they started playing different venues. They are playing at The Moxi for New Year’s Eve and what a great way to end a year. INTHEWHALE’s music is available on all major streaming services.

Jellyfish Farm makes progressive rock music that is all instrumental, with an edgy side begging to be added to your playlist. Jellyfish Farm has been playing live shows since 2018, and just released their debut EP “Jellyfish” on all streaming services and YouTube.

Their math rock album has touches of synth, metal and it all comes together flawlessly. Jellyfish Farm will be playing the NYE Bash at The Moxi alongside INTHEWHALE, so that’s a local show you can’t miss. (How many more times do we need to say it!)

For fans of classical sound, Kaitlin Miller is a Greeley-based harpist who is available to perform at private events, and she’ll even teach you how to play. Kaitlin plays classical compositions and has you feeling like you’re sitting right in a concert hall listening in. Harmonious and connective, the music Kaitlin creates is great for weddings, religious gatherings and more. Kaitlin and her beautiful gold harp are standouts when performing.

Kaitlin publishes her music on SoundCloud. She is also available for private bookings and has many testimonials from past clients on her website.

Liam Garcia is a guitarist who has been making a local name for himself since he was just a kid. In 2019 he was a finalist for national competition “Young Guitarist of the Year.”

Liam’s guitar melodies are a tad bit electric with a great soft rock type feel. Liam likes having a soft edge to his sounds, being great for a nice time cooking at home, hanging out with friends, studying and more.

Liam currently studies at the world-renowned Berklee College of Music and can be heard on stages as large as Lollapalooza, but his family is still local to Northern Colorado. (He’s the son of Socrates Garcia and Wanda Vasquez Garcia.) He posts his new riffs on social media, where you can stay updated on his works.

You know Neyla Pekarek, even if you don’t realize it: The singer-songwriter used to front for The Lumineers. Neyla is a University of Northern Colorado alum, who is a classically trained as a vocalist, pianist, and cellist, whose music offers a folksy doo-wop and blues mix.

In recent years, Neyla has been working with the Denver Center for the Performing Arts on a world premiere musical, “Rattlesnake Kate,” based on the real life of Northern Colorado pioneer Kate McHale Slaughterback. Neyla released a concept album called “Rattlesnake” with the same inspiration source.

Neyla makes music with lyrical narratives that deliver a vibe that’s perfect for just relaxing around the house, meeting up with friends. It’s also great for creative inspiration! Neyla’s music is light and fun, and we love that she created an entire album (and now music) dedicated to a local legend.

Neyla Pekarek’s music is on all streaming platforms, and she has an online shop for the new album and merch.

Greeley, Colorado, rapper Sauce.K has made a splash in the hip-hop industry in recent years, and he isn’t stopping anytime soon. Sauce.k has been voted the Best Musician in Greeley for the last three years and also won Best Musician of NoCo in 2021 and 2022. And those are just his local accolades!

Sauce.k makes vibey rap that’s exactly right for a Saturday night, blasting in the car and just chilling out with friends. This Greeley artist is making waves in the industry and always maintains a positive attitude with his success and music, keeping his fans in mind.

Trash Cat is made up of three pals from Greeley, Colorado, who like to watch cartoons and write songs about them! (You might also recognize their faces from The Burroughs.)

This eclectic band fuses pop, funk and jazz with a lot of backstory and comedy when they make songs. Trash Cat has been making albums since 2019 and sells merchandise to accompany the music. The vibes are light, and stories are shared. This band began in Greeley and still creates music, although they are currently on hiatus because the band is expecting a trash kitten (a.k.a. a baby)!

Trash Cat is a great fit for a car ride, walk around the neighborhood, cleaning the house and just anything that may need some poppy beats thrown in.

Indie surf rock band Violet Visionaries play at some of our favorite local venues, and their music videos are loaded with downtown scenes and Greeley neighborhoods. This band has a great vintage sound that is sure to be a great addition to your music library. The music is laid back and uplifting, so there’s some great songs to enjoy while at a coffee shop, driving with your friends, as background music to your skiing day tailgate, and so much more.

The Violet Visionaries have been making music and posting online since 2019 and their most recent song “Camper Story” is an ode to a feel-good genre from the 60s and 70s. Their music is available on all streaming platforms, with two locally shot music videos on YouTube.

Which Greeley music acts are you obsessed with? We couldn’t fit all of Greeley’s originals on this list, and we’re always looking for new tunes! Share your story about a local band or musician you love here.