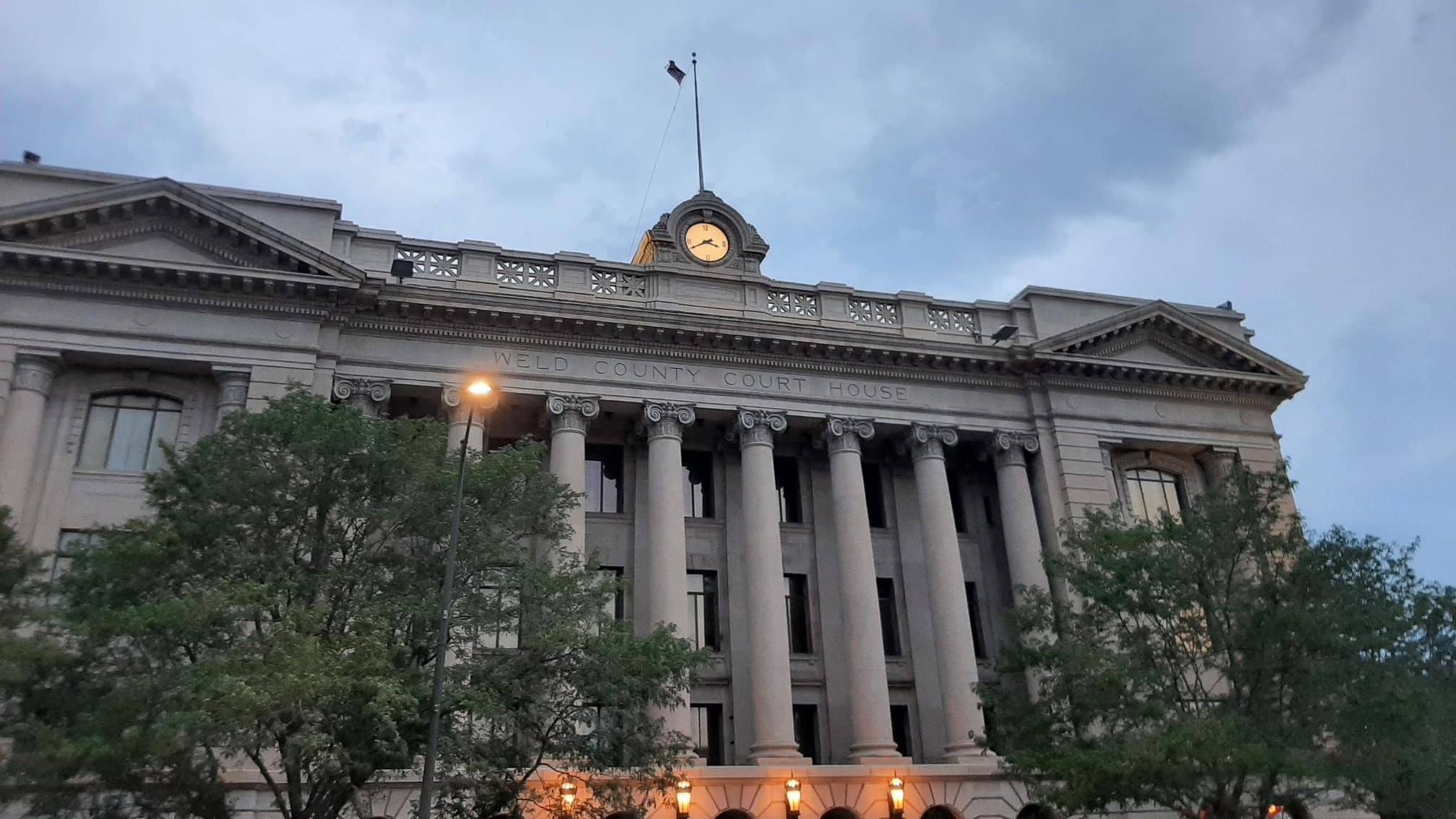 Whatever you call them, Halloween tends to bring out people’s fascination with things that go bump in the night. And Greeley, Colorado, has its fair share of supernatural lore.

We asked our intern Elise Shoemaker to compile all her favorite ghost stories and unexplained mysteries from around town. Below is her recounting of Greeley’s haunted history.

If you’re especially brave, consider taking a nighttime walking tour past all these local spots and decide for yourself: tall tales? Or haunted horrors?

Editor’s note: Some of the following stories involve violent crimes, accidents, or suicide. We ask that you exercise your own judgment regarding the subject matter before continuing to read this content.

Skip the ghost stories and jump straight to the haunted self-guided walking tour.

The downtown courthouse’s marble structure hasn’t always existed. It began as a single-story brick building built in 1877, but the city quickly outgrew the space and replaced it with the statement building we have today.

With so much history at the site, it’s no surprise there is paranormal activity looming in its corridors.

The Weld County Courthouse’s fifth floor houses little more than concrete, empty halls and storage boxes. And, of course, a ghost that loves move objects toward anyone who visits the floor.

An unnamed reporter back in 1998 claimed when doing research on this floor, boxes moved on their own. Interestingly, the boxes held exactly the articles and entries he needed. (How thoughtful of the poltergeist!)

To this day, some employees refuse to step foot on the fifth floor.

Many people report seeing ghostly figures and experiences when gazing at or being close to a grandfather clock in the building. It drew in so much attention that a séance was conducted, although the activity didn’t prove anything.

It remains a mystery as to why this specific clock may be haunted.

During a trial, a judge claimed that there was a child hiding behind the bench and yet no one found evidence of one. And many claim that the lights flicker, and the chandeliers swing back and forth for no apparent reason on the third floor.

Some theories about these apparitions and ghastly happenings are the spirit of WD French, an 1888 lynching victim. He was killed on site at the courthouse before construction began, so it makes you wonder.

If you know of any other stories or have your own creepy experiences at the courthouse, please share and continue the curious history of this government building.

The Ghost Clowns of Greeley

The “Ghost Clowns” name comes from a disaster in August 1884.

As a traveling circus act made its way from Fort Collins and onward towards Denver by rail, the troupe stopped to rest at Greeley’s Union Pacific Train Depot. Without warning, a sleeping car caught fire and trapped 10 performers inside. All 10 men died.

Not knowing (or caring) how to respond, the rest of the circus ditched the entire car and fled town. The train depot kept the victims inside a makeshift morgue and made preparations for a proper burial.

A Public Gravesite that Still Exists

The victims currently rest at a single gravesite located at Lynn Grove Cemetery. The gravestone names “ten circus men,” but many state that the name “Ghost Clowns” is more apt, since the train depot has a multitude of chilling paranormal experiences that many connect to the abandoned victims of the fire.

The Haunting of the Train Station

Many people claim to have experienced many mysterious happenings here, like slamming doors, the smell of cigar smoke, mysterious shouting and running, and even a calculator being operated without anyone touching the buttons or being near the machine. Other unexplained moments include an employee’s hair being played with from behind, front desk bells ringing when no one was inside, and electronic malfunctions with no explanation.

UNC is a Haven for Bears and Ghosts Alike

Many students and faculty claim that nearly every building on the University of Northern Colorado campus is haunted. With that said, the main hauntings take place in student housing buildings Weibking, Harrison, Turner, and Fraiser Hall.

Students living on central campus in Weibking Hall have experienced a ghost commonly known as Edith. Edith supposedly hanged herself in the basement but her known life is up to debate for lack of accurate history on her. However, students know her afterlife much better since she is often around. She is most known for rolling marbles around, electrical malfunctions, door slamming and observing residents in their rooms.

Students on UNC’s west campus have similar experiences with paranormal activity. In Turner Hall, many report slamming doors, elevator malfunctions, and the persistent smell of marijuana. Many speculate that the hauntings are caused by a student who once jumped out of the 11th floor windows.

Fraiser Hall is named after past UNC president George Fraiser, who served from 1924-1948. Many people report seeing him at his namesake building, where he had supposedly turned sewing machines on and surprised students in the hallways with sudden drops in temperature and unexplained noises.

Real or imagines? With all these experiences and the multitude of reports in various buildings, it really makes you wonder if all these are true hauntings or simply students telling tall tales. It’s even more strange when you consider that UNC has removed most articles from archives that describe anything supernatural or unexplained happening on campus.

The Haunted Hotel in Downtown Greeley

The site of the Clarion Hotel, formerly the Ramkota Hotel, used to be the Chief Theatre. Built back in the early 1900s, it had many names over the years: first the Orpheum Theatre, then the Rex, and finally the Chief Theatre. It was known for 15 cent tickets and was closed in 1973. In 1985, the building was torn down to create a hotel’s parking lot.

The hauntings are claimed to have begun back in 1974, when people saw a young woman dressed in a long white gown wisp around the third floor behind the permanently closed building. She is rumored to still float about on what is now an unoccupied floor of the Clarion, and some visitors claim to see her peeking out of windows and looking outside. This ghostly woman also likes to travel, as some employees and witnesses claim that she has visited them at their homes, too.

Supposedly her history is quite older than 1974. A self-proclaimed “transmittal mind hypnotist” and various psychics say she was killed by her theatre manager boyfriend between 1910-1920. They say she was buried in the basement, but no evidence was ever found of her human remains.

This hotel and parking lot serve as spots for a lot of paranormal activity, and it may never be logically explained away.

Past and present Greeley Central students claim that on the building’s fourth floor, right above the theater’s main stage, they have seen a spirit look out below from the window in the costume room. Although not much is known about this apparition, some say it was a drama student who committed suicide in that room after not getting the lead role in a play. There is no record or evidence of that happening on school grounds, but it has been speculation and storytelling for years.

The Best Haunted Restaurant in Greeley

Former employees and owners of Isla Bonita (now Sherpa Grill) in downtown Greeley claim you can hear haunting voices coming from the building’s basement and much more.

Aundrea Venegas claims that there have been some firsthand encounters of spirits at the restaurant, like footsteps on the stairs, lights turning on and off, and doors opening and closing on their own. Even with all these experiences, by far the scariest comes from her husband’s story. One day when he was all alone in the restaurant, he heard distinct screaming coming from the basement, yelling his name. To this day, Venegas claims many employees refuse to step foot into the basement.

Downtown Greeley has its fair share of culture, stories, hauntings—and great food. Sherpa Grill fits into all those categories! Experience both the fantastic Indian cuisine and even a couple of frightening experiences for yourself.

A One-Stop-Shop for Hair and Hijinks

Inside the Coronado Barbershop, there’s a kind ghost named George. George is said to be friendly and just likes to play, but one person may beg to differ.

The shop owner Stephanie Hayes claims that while she was inside, there was a sudden loud crash in the stockroom. Confused, she went to check it out. A forgotten hammer had fallen from the storage shelves to the floor, even though no other boxes or tools seemed to be disturbed. There was no way into this room besides the locked door, and no one was around besides Hayes.

At the shop, clippers and razor blades, which are cleaned all on their own, find themselves sorted and placed back correctly (thanks, George!). Hayes claims that she has a very rigid cleaning routine with her tools and that when no one else was in the shop overnight, her tools had been returned and her station cared for without any reasonable explanation.

With everything happening at the shop, will you be the one who ventures over to meet George? Stay for the haircut or beard trim and maybe walk away, not just with a good style, but with a ghost story to tell as well.

What do you think about these cases and experiences from so many about Greeley’s haunted history? Do you believe in the spiritual remnants of those long-forgotten or is it just a bunch of spine-tingling storytelling? Take our walking tour or book a guided one from local business Greeley Ghost Tours and decide for yourself.

Our Halloween themed self-guided walking tour is a six mile, two-hour experience. For a shorter event, consider visiting just the UNC portion of the tour (stops 2-5) or just the downtown portion of the tour (stops 6-10). If you’d like to visit each spot but prefer not to walk, we recommend hopping on a GET Transit bus to quickly navigate your way between the three main location “hubs.”

While you’re downtown, consider calming your eked out nerves with a visit to one our nearby Greeley Grub businesses!

Hub One: We begin at the cemetery

Hub Two: One of the most haunted universities in the country

Please note: Many UNC buildings are not accessible to the public, but university grounds are open to all and patrolled by campus police.