As Greeley’s Med Evac celebrates 40 years and 30,000 missions, one mother reflects on its life-saving impact 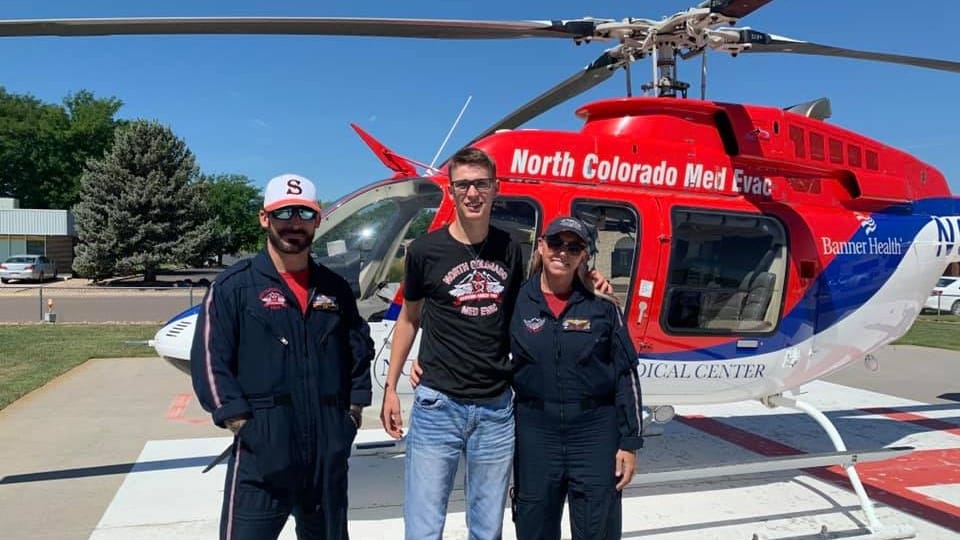 Launched in 1982, Banner Health’s Med Evac originally operated under the name AirLife of Greeley. As the 40th anniversary of its founding approaches, we talked with the Gilliland family of Sterling, Colorado, about how this award-winning Greeley medical service changed the course of their family’s history.

On June 15, 2018, teenager Bryce Gilliland and a buddy were taking the back roads from Sterling to attend a summer football camp at CSU in Fort Collins. Bryce wasn’t wearing his seatbelt.

As the boys attempted to pass a slow-moving semi on the crest of a hill, the driver lost control, and Bryce was ejected from the vehicle as it rolled. He landed face-down on the pavement, and their truck landed over him, leaving him with massive injuries.

Back at home, Bryce’s mother, JoAnn Gilliland, says she knew something was off.

Trusting her intuition, JoAnn started driving toward town, taking the route she suspected the boys would have taken themselves. She found the accident scene.

“The sheriff’s department had the road blocked, and the state patrol had started an investigation. But they couldn’t tell me the status of any of the passengers or the driver. All they could tell me was that they had been transported [to the Sterling Regional MedCenter].”

JoAnn called her husband Craig, who was working in town, and he rushed to the hospital.

“He went to the hospital first, and he just told me it wasn’t good.”

Shortly after, when JoAnn pulled up to the Sterling Regional ER, she jumped out of her car so fast that she forgot to put it into park.

“The director of the emergency room had to jump into my car after me; otherwise, it would have just kept going.”

A Sterling medical team stabilized Bryce, but they quickly decided he needed additional care. He was placed in a Greeley Med Evac helicopter with a team of nurses and paramedics and swiftly airlifted to Children’s Hospital Colorado in Denver.

In its 40 years, the Med Evac helicopters have completed 30,000 missions. One was Bryce’s.

While he was transported south by air, a family friend rushed JoAnn to Children’s by car, along with a huge caravan of other family, friends, and community prayer givers. As they went, flight paramedic Pam Rice called with updates midair.

“Pam did a wonderful job of keeping us informed along the way. Still, I couldn’t answer the phone. I had my best friend answer every time because I couldn’t hear any bad news.”

“In the air, they don’t have a doctor to rely on, they don’t have a full medical team. It’s all on them. They are so important to minimizing the long-term additional damage. Lack of oxygen, stress on the body, preventing a seizure… Bryce’s life was entirely in their hands.”

Following a coma and rehabilitation, Bryce eventually made a complete recovery, thanks in part to his Greeley Med Evac team. He is now pursuing his bachelor’s degree at a university in South Dakota.

AirLife of Greeley’s first-ever mission was to transport a 10-month-old burn victim. Its thousandth mission saved the life of a one-year-old drowning victim.

For patients like these, Med Evac—now operating out of Greeley, Boulder, and Akron—can buy precious time for families experiencing the worst days of their lives.

“Providing a safe, rapid and high-quality response is key to helping those patients in need,’’ said program director Joe Darmofal. “And in remote, rural areas where medical facilities can be several hours away by car, we provide an essential alternative. It’s been an honor for us to provide excellent medical care and transport from our bases in northern Colorado.”

With helicopters that can go as fast as 150 miles an hour, stocked with equipment such as ventilators, cardiac monitors, medical oxygen, IV pumps and medications, Med Evac nurses and paramedics provide life-saving care when seconds count.

As Med Evac celebrates its anniversary and major mission milestone, JoAnn reflects on the impact Med Evac paramedics had on Bryce’s journey.

“Their work is not an eight to five. It’s not a Monday through Friday. I think about the sacrifices they give to the lives of others while away from their family.”

She hopes Bryce’s story provides courage for other families amid crises.

“Any family that’s experiencing something like this, I don’t want them to give up hope. Miracles do happen, and traumatic brain injury patients do heal.

“I can never thank [the Med Evac team] enough. Their fast response was the first step in his recovery. It’s incredible that I still have Bryce to experience life with.”

Greeley Med Evac will hold a free anniversary party Saturday, Aug. 13, 2022, at Island Grove Regional Park to celebrate 40 years and 30,000 missions of life-saving work. The fun begins at 11 a.m. and will feature a live band, flyovers, and food trucks. All are welcome.