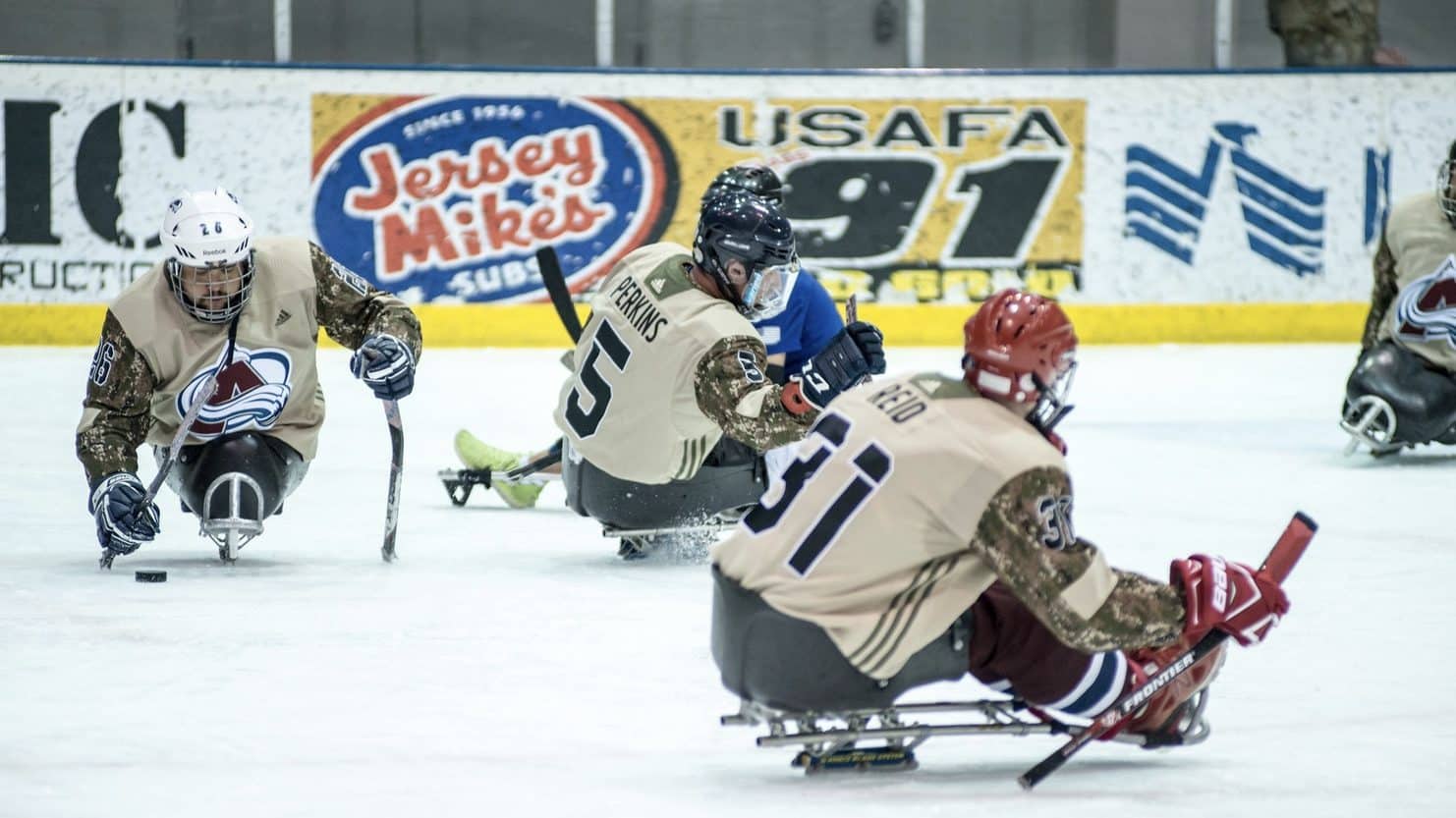 With a long-awaited Stanley Cup victory in hand, Colorado Avalanche players may have hung up their skates for the season, but that doesn’t mean hockey is over for the year. At least not in Greeley. Hockey — specifically— sled hockey is alive and well in Greeley thanks to a dedicated city staff, an enduring passion among sled hockey advocates and a relentless commitment to inclusivity.

Sled hockey, invented at a rehab center in the 1960s in Stockholm, Sweden, is a sit-down version of ice hockey designed for players who have lower-limb impairments that prevent them from playing traditional stand-up hockey. Each player sits atop specially constructed sleds affixed with two blades underneath the seat. Using their arms to propel themselves around the ice and their hips to maneuver the sled, players carry two short, wooden sticks and are intent on slapping a puck into a net. Other than sleds and some minor equipment adaptations, the number of players, rink and puck sizes are similar to traditional hockey.

John Reid is credited with helping launch the city’s sled hockey program in 2017 through his partnership with the Greeley Ice Haus. In addition to being a physical education teacher at Weld County’s Gilcrest Elementary School, he manages, coaches and plays for the Warrior Avs Sled Hockey Team, an affiliate of Colorado Sled Hockey, the Colorado Adaptive Sports Foundation and the Colorado Avalanche.

What makes hockey so special, he says, is that the sport is particularly emotional. “It brings people out of their shells, allowing them to be free.” In addition, Reid says, “Sled hockey is community, and that’s why the program works here. We went to other cities to start this. Greeley wanted it, we promoted it, and the Ice Haus is doing it.”

Mark Mann, recreation manager for the City of Greeley, which oversees the Greeley Ice Haus, agrees. Mann, who has 35-plus years behind him managing ice arenas, remembers how “enthusiastic John was when he reached out to us. We were eager to help organize [a program].”

Today, equipped with a special grant for five sleds, the city’s goal is to build upon the program and expand it to include other adaptive sports. The Ice Haus offers weekly sled hockey programming including instruction, skill-building and scrimmage time.

Best of all, says Mann, “the Ice Haus is intentionally inclusive. Whether disabled or non-disabled; any gender; there is no age limit. Everyone has the opportunity to participate in sled hockey at the Ice Haus.”

This focus on inclusivity and the “passionate advocates” who promote Greeley’s sled hockey program are what won over Samantha (Sam) Summers and her fiancé Ryan Smyth. Summers suffered complete paralysis in her legs (T8) when a car turned in front of her while she was cycling in Boulder in 2018. An avid ice hockey player before the accident, Summers knew she wanted to keep playing after the accident.

Now, she says, “like everything else, I have to adjust if I want to play. I have to figure out what muscles to use that I didn’t use before.” But it’s more than exercise for Summers. She appreciates the camaraderie and the non-intimidating environment at the Ice Haus. “The people there make it that way. You can play with athletes like John [Reid] or newcomers who are starting out.”

What’s more, she adds, the sled hockey program at the Ice Haus allows her and Smyth, who is non-disabled, to play the sport together, which she says is particularly important to their relationship. “We are always adapting, so we can do things together; so we can share experiences. But we don’t have to adapt in Greeley, we can just play hockey together.”

Have the Greeley Ice Haus and its programs impacted you and your community for the better? Share your Greeley story here.