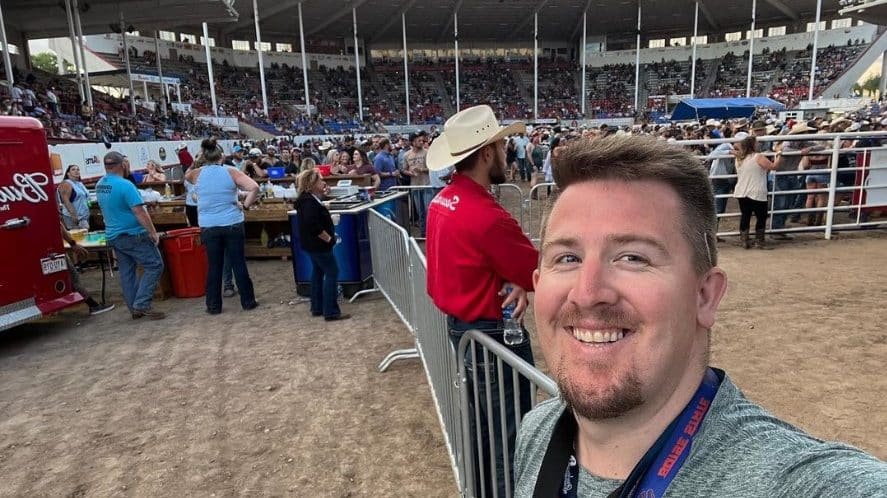 “12° at my house this mernin,” greets Kody Wilson on a recent bitter morning in Greeley, Colorado. The Facebook post — in typical fashion — is followed by a cold face emoji and a question, “How about you?” accompanied by a couple eyeball emojis. And thus begins an engaging back-and-forth between Greeley-based Kody and hundreds of Denver & Front Range Weather Facebook followers, who will subsequently respond with comments, memes and their own emojis to help further the conversation and brighten an otherwise cold day’s forecast presented by Kody the Weather Guy.

Such weather banter may not sound typical — especially when tuning-in to get the weather is one click away — but Kody is not your typical weather forecaster. A self-described freelance meteorologist and social media personality, Kody honed his forecasting chops in Greeley, turning his passion for weather, knowledge of the science and inherent communication skills into a craft that many not only depend on, but are entertained by as well.

Every meteorologist has access to the same data, Kody explains, but it’s how that data is assessed, interpreted and then communicated that matters. “The way you add value in the marketplace,” he says, “is by doing things no one else does.” And, for Kody, going deep into a forecast and communicating what it actually means is just as important as summarizing the top line.

It Started With ‘Twister’

Born in Caldwell, Idaho, and raised in tiny Vale, Oregon, Kody Wilson knew he wanted to be a meteorologist as early as six years old.

“My mother says as a child I was always looking up at the sky and watching the clouds, and when I saw the movie ‘Twister,’ that was it. I knew I wanted to [forecast weather].”

But eastern Oregon didn’t provide the “unpredictable weather challenge” that Kody was seeking. When the University of Northern Colorado admitted him into the meteorology program in the school’s Department of Earth and Atmospheric Sciences, “it took me five milliseconds to accept.” The program was not only comprehensive but it was small and for a small town boy from out of state, the program was made even more valuable because it was easy for Kody to work with faculty and connect with peers.

With his UNC-backed education in hand and built-in community relationships by his side, Kody was ready to build his business in Greeley. Instead of taking the corporate track or TV broadcast route, Kody preferred the freedom of entrepreneurship and the value of communicating through social media.

He soon launched two Facebook pages under the trade name KBW, LLC: “Treasure Valley Weather HQ,” which forecasts weather in eastern Oregon and southwest Idaho, including the capital of Boise, and “Denver & Front Range Weather,” which follows weather in the Northern Colorado region.

With the information at his fingertips, Kody realized there’s both a personal value to being your own boss and a financial one. Forty local businesses sponsor his digital pages, and Kody also subcontracts with clients, including clients in the agricultural industry, providing detailed weather forecasts that are crucial to their economic well-being.

All Kinds of Unpredictability

If unpredictable weather originally attracted Kody Wilson to Greeley, the city’s “unpredictable growth” may be what’s keeping him here.

“Greeley was like a ghost town when I first moved here,” he says. “But Greeley is growing fast and as more people move here and [business] revitalization takes place, Greeley continues to evolve.”

In addition, Kody points out, there’s a “wealth of talent in the city” and its diversity helps him stay relevant.

And, while some may wonder why a weather guy with Kody’s credentials and following doesn’t relocate to a bigger city with a large television presence, Kody pushes back. He likes the community of the city as well as the autonomy it affords, and his ability to inform, communicate and educate a wide, diverse audience over social media is unparalleled.

“I never say never, but there’s so much opportunity right here.”